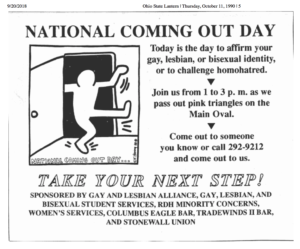 National Coming Out Day (NCOD) was founded by Robert Eichberg and Jean O’Leary, Gay Rights Advocates in Los Angeles in 1988. The goal was to highlight the act of “coming out” as an activist, basic form of political expression.   Believing that homophobia reflects ignorance and that once people realized that their friends, colleagues, family members were lesbian or gay, that homophobic views would diminish.  They chose October 11 of every year since it is the anniversary of the 1987 National March on Washington for Lesbian and Gay Rights. 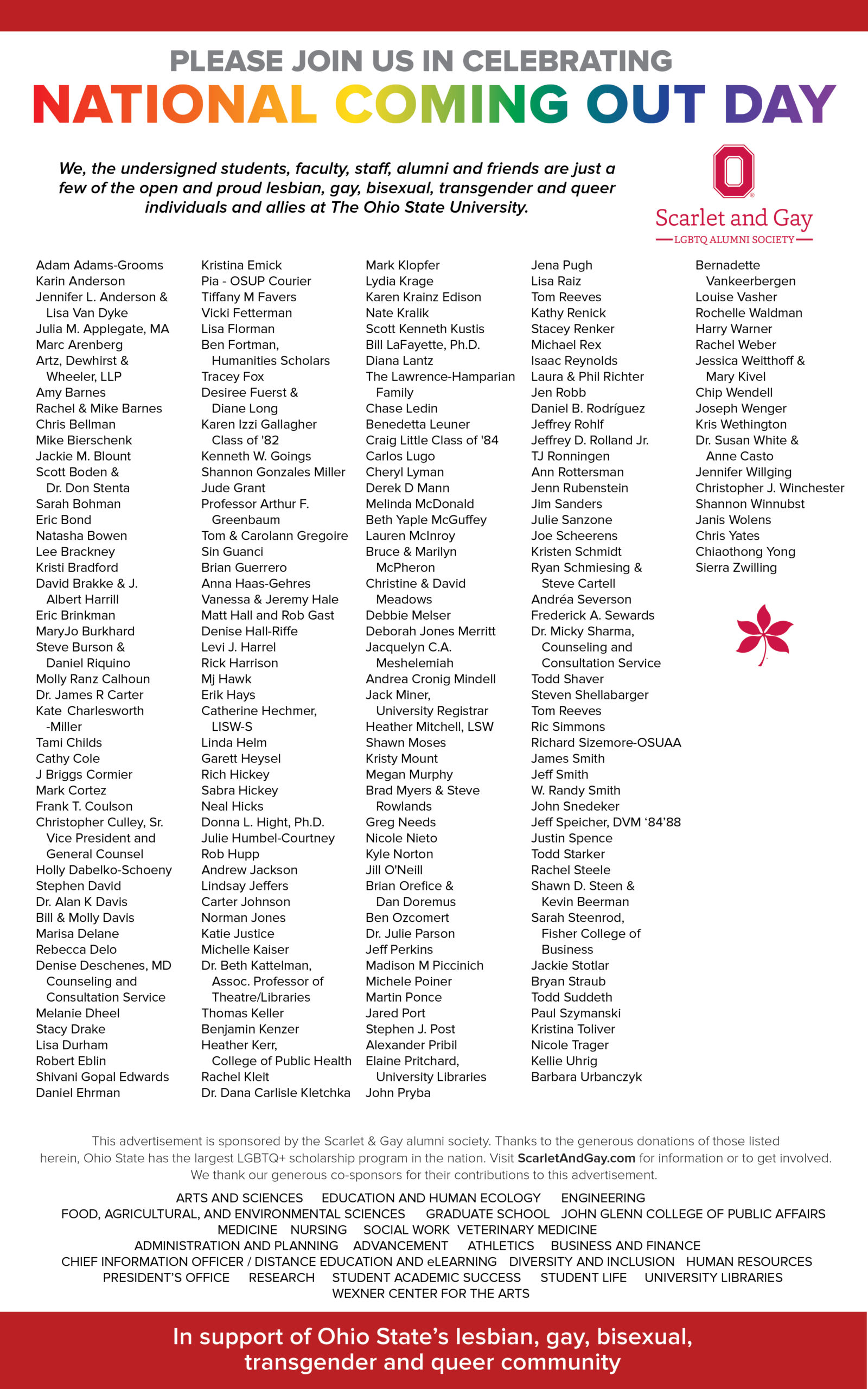 The first notice of NCOD in the Ohio State Lantern appeared on Thursday, October 11, 1990 and it appears here.  Yet as early as 1989, LGBTQ students were chalking the sidewalks near Lincoln and Morrill towers to announce NCOD and drew protests covered in the Lantern.  Over the years, the awareness campaign has been led by various groups and offices across the university including the former GLBTSS (Gay, Lesbian, Bisexual, Transgender Student Services Office).  For last 15 years, Scarlet & Gay: The OSU LGBTQ Alumni Society has underwritten the costs to print the ad primarily through individual contributions and Offices and Organizations.

Patron level-sponsorship of the NCOD Ad sustains the foundation of the Scarlet & Gay scholarship program which currently boasts 13 different LGBTQAI + Scholarships.  Our patron champions will also receive prominent recognition in other Scarlet & Gay communications and events for the academic year.  Any contributions received beyond the cost to print the ad go directly to scholarship support.  Access is key to our efforts, so individuals can also sign the ad without making a financial contribution.

While the celebration of the day and the NCOD Ad have evolved over the years, one wonderful truth continues: The Ohio State University is a leader in celebrating diversity, equity and inclusion for all and the OSU LGBTQAI + community remains a core embodiment of that reality.

Have you signed the Ad yet this year?

The Scarlet & Gay LGBTQ Alumni Society is committed to promoting the best interests of the lesbian, gay, bisexual, transgender and queer alumni and students of The Ohio State University.