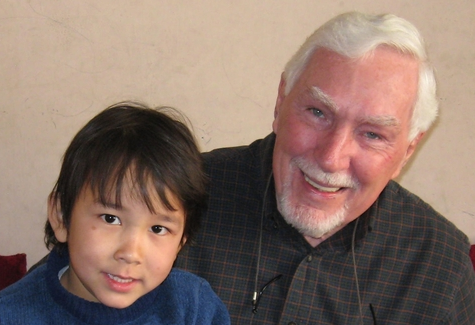 Lee Hilling graduated from Ohio State in 1974 with a Master of Health Administration degree. Since 1991, he has gone on to do extensive work abroad. Hilling has traveled, lived, and worked in Pakistan, France, East Africa, and Afghanistan.  Currently he is the residing chairman of the French Medical Institute for Children. The FMIC works extensively in Afghanistan, a place where Hilling has found his passion.

Hilling has traveled to Afghanistan over 60 times and spent 11 years with the FMIC in Kabul, Afghanistan. In 2011 Hilling attended the FMIC’s First International Pediatric Symposium, where he became inspired to write about FMIC’s work in Afghanistan. Published this past February, Hilling’s book is titled, “A Place of Miracles: the Story of a Children’s Hospital in Kabul and the People Whose Lives Have Been Changed by It.”

What was your main motivation behind writing “A place of miracles”?

I realized we were holding on to something pretty precious here and it was a story that should be told and the people that are involved and working at it-I think are heroes. If you have a chance to read the book, you’ll see stories of people who are heroic. They’re the providers of care and have been involved with this hospital.

I felt this story needs to be told in the West, North America, maybe the US in particular. I don’t think it’s been high on the radar screen for most Americans and the news they do get about it is so slanted. They don’t hear human stories too much of Afghanistan. I wanted to tell a story that I think the North American public should hear about what life can be and things that can be accomplished in Afghanistan.

I think that FMIC is one of the biggest success stories of humanitarian development that has happened in Afghanistan.  So I just wanted to tell the story.

What would children’s hospital administrators here in the States take away from the book?

I think any American that is involved in children’s Hospital care already has a special sensitivity to the vulnerably and the needs of children and perhaps this would strengthen their understanding that worldwide, children more than almost anybody in the world are getting devastated by the conditions with war, poverty, destruction.

In terms of what they could apply from this story, the pursuit of high standards is not just and American thing, it is something that they could set a model and they can participate. One of the partners we’re looking for is with the Stollery Children’s hospital in Edmonton Canada, which is a teaching hospital for the University of Alberta.

I hope that this book might stimulate people to see that through their own careers or their institutions that there are things they can do that won’t require great amount of resources on their part, but they can contribute to places of great need.

Lending their knowledge and providing guidance, opportunities perhaps, for training opportunities in person, or video conferences. I hope I stimulate people to think about more they could do in this context or environment.

What advice would you have for someone that wants work in the Health Care systems abroad?

The first thing is working abroad requires the same highest level of confidence and expertise; if you have an aspiration to work abroad you have to bring something to the working abroad environment.

Develop a high level of expertise and confidence so that you have something to offer is the first thing to think about. I don’t think it’s a place for entry level work. You’ve got to mature your career and if it is an ambition or a goal, you’ve got to look for the right place to step into that field or into an international setting. They want confidence, and expertise.

The more profound thing is human dignity. I see a lot of Americans come into the international setting and they have a certain arrogance about them. The greatest advantage that an ex-patriot has is for people to pick up the message that you respect them and their human dignity. It doesn’t matter where they are in life, whether they’re the poorest people out in a remote place in Afghanistan or a Pakistani doctor that was trained in Great Britain.

They all know in a minute whether you respect them and afford them dignity.

You have any expertise that you want, the thing I learned is that compassion and dignity, and if you’re perceived as that, then whatever technical and professional skills you can bring to it are very well received.

What does the future of Afghanistan hold?

The future is uncertain, but we have made some progress.

Is there anything you want people to know specifically about your book?

All of the proceeds from the sales of my book will be passed back to the hospital in Kabul, for patient welfare.

Purchase “A Place of Miracles: The Story of a Children’s Hospital in Kabul and the People Whose Lives Have Been Changed by It” on Amazon.